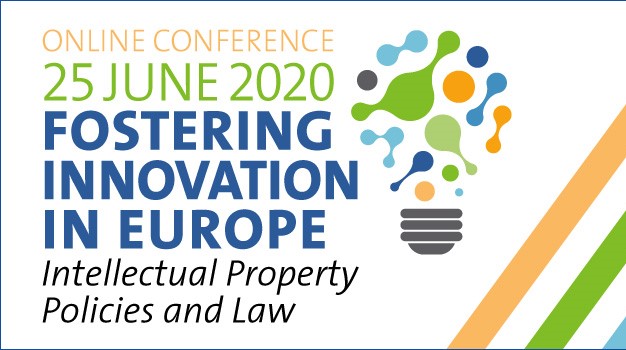 Webinar, 25 June 2020, organised by Maastricht University in collaboration with EUIPO.

Last 25th of June the EIPIN IS researchers had the (online) opportunity to present some of their research findings and their practical implications to a wide audience composed by more than 450 policymakers, practitioners and scholars. The aim of the event was to show not only that the work of the ESRs is outstanding from an academic point of view, but also that their results can positively contribute to the society.

The conference – co-organised and hosted by the EUIPO – started with a speech from Patricia García-Escudero (EUIPO´s Academy Director) who recalled the importance of the cooperation between academy and practitioners. She highlighted the EUIPO´s involvement in EIPIN IS from its very inception and some of the – current and prospective – collaboration areas between EIPIN IS and the EUIPO, such as facilitating access to knowledge or EIPIN´s researchers’ secondments. Finally, she stressed the commitment of EUIPO with the network for the future in activities such as the dissemination of research results.

Then the floor was for Prof. Kamperman Sanders who gave an overall view of the EIPIN program to those attendees which were not familiar to the project, highlighting the importance of this type of dissemination initiatives aimed at ensuring that the results of (publicly funded) research do not remain at a mere theoretical level and have a positive impact for society.

Prof. Drexl opened the panel with a few words regarding the relationship between innovation and IPRs pointing at the innovative dynamics – not necessarily linked to exclusivity – as the true driving force of such relationship.

Girish Nagraj analysed on his presentation “Contextual Emergence of Collaboration (Innovation): Does One (Patent System) Size Fit All” the different nature and dynamics of two models of collaborative innovation: Open Source communities and Standard Developing Organisations, the evolution of such meso institutions and the implications of this “mix and match” of IPRs from the perspective of a complex adaptative system. His commentator, Dr. Claudia Tapia, highlighted that for ensuring the highest innovative performance SDOs should be business-model neutral and accept all IPR monetising models.

Panel 2: Governance of Production and Technologies

The panel kicked off with Prof. Desantes Real words with regards to the not always straightforward relationship between IPRs and innovation, which sometimes resembles a true love story, other works as a settled, routine-based marriage and others as a destructive yet creative relationship.

Maurizio Crupi presented his thesis on “PDOs and PGIs: a pragmatic approach to the link to origin”. After a detailed analysis of PDOs and PGIs specifications, he concluded that the difference on the link of origin for PDOs and PGIs is quite blurred. Maurizio proposed to have more detailed guidelines, more structured templates, and to put the focus on the origin of raw materials. Dr. Javier Guillem congratulated him for his work and recalled the need of put the focus on the quality of the end product, rather than in other – more circumstantial – aspects.

Jared Onsando discussed “Intellectual Property Rights and the Structure of the EU Seed Sector”. His starting point is that barriers to access have increased in the EU seeds market. He proposed amendments to the acquisition of exclusivity rights and to take into account the need of a breeders´ exemption-alike rule for patents which protect genetic properties. His commentator, Szonja Csörgő substantially agreed with his views, although she pointed out that there are facts that might suggest that barriers are not that high. Moreover she shared his views with regards the exploration of new licencing platforms.

Francesca Mazzi tackled the topic of the “Patentability of AI generated inventions: a case study on Pharma” The challenges for patentability are different if the AI merely “assists” the inventor (ingenious machine 1.0) or if it actually “invents” (ingenious machine 2.0). She concluded that legal analysis must be complemented by competition and economics´ considerations and that there are sector specific particularities in the pharma sector which need to be considered. Prof. Duncan Matthews substantially agreed with her views and recalled the role of interdisciplinarity to face this challenge.

Vicente Zafrilla Díaz-Marta presented “What could Standard Developing Organisations do to face disclosure deviations? A proposal” a set of measures aimed at an improving SEP disclosures, consisting in an early blanket declaration – coupled with a negative disclosure, complemented with a late specific disclosure (only mandatory if the SEP holder engages in licencing). Emilio Dávila commented that the proposal is quite aligned with the Commission approach to the topic and that the findings provide sounded grounds and innovative ideas that might be worth to discuss in the Commission´s Experts Group on the topic.

After the second panel – and before lunch pause – the participants and speakers had the opportunity of informally discussing some of the already addressed topics or those which were going to be discussed in the afternoon sessions.

Prof. Christoph Geiger kicked off the afternoon session with two poll questions regarding the international dimension of the IPR system with and within the EU. He stressed its multifaceted dimension – and therefore the heterogeneity of the topics addressed in the panel.

Naina Khanna presented her research on “Pharmaceutical Patent Quality: An Industry Perspective” in a question-and-answer format together with her commentator Dr. Axel Braun. She introduced her interview-based methodology aimed at identifying the most relevant patent quality indicators such as the quality of search reports or its timeliness. Both speaker and commentator agreed on that patents play a different role depending on the size of the company and the sector and therefore that the relevance of patent quality indicators is skewed.

Anastasiia Kyrylenko deconstructed “the EU IP norm-export to third countries” by challenging some of the mantras which surround IP chapters of Free Trade Agreements. Namely, her analysis of EU FTA with Moldova, Ukraine and Georgia show non-negligible differences between them both at scope and implementation levels. Overall, she advocated for familiarising third countries with the EU framework for an informed negotiation and implementation. Her commentator, Tamas Kiraly agreed with her analysis and listed further initiatives implemented by DG Trade to try to bridge such gap.

Letizia Tomada discussed “The Unified Patent Court and Its Implications for Innovation of Start-ups” arguing that it is not clear that the UPC system would have a positive impact on the innovative performance of start-ups and SMEs, and consequently, recalled the need of a more balanced system within the UPC or, preferably within an alternative EUTM-like system. Dr. Christoph Heath argued that such balance can be achieved by stablishing a common procedure for cross-border litigation, increasing national courts´ specialization (by reducing its number) and giving appropriate consideration to trade secrets’ protection.

Prof. Guido Westkamp opened the panel by stressing the role that institutions – notably supranational institutions – have for the governance of innovation in different IP settings and industries.

Natasha Mangal offered an institutional approach to “EU Copyright Policymaking in the Digital Age”. She anticipates challenges ahead in developing more responsive EU copyright regulation, and suggests utilizing network governance models and agencies. She proposed that an EU-level agency can contribute to more coordination, and overall, to better policy integration. While he agreed with the need of further integration, Leonardo de Terlizzi was of the opinion that the role and competences of an EU-level copyright agency must be subject to the principle of subsidiarity, and stressed the role of national institutions and collecting societies.

Gerben Hartman presented his ideas on “Conditioning EU-Member States’ international treaties in accordance with the EU constitutional framework: ways forward for the UPC”. He argued that any European patent litigation system must comply with the EU constitutional framework (incl. legal bases and CJEU oversight). He explained two ways forward post-Brexit: an exclusive UPC (only Member States) or a non-exclusive UPC (also third countries), each with specific requirements. Prof. De Witte stressed that the UPC Agreement is only open to Member States and suggested amendments via application of the Vienna Convention on the Law of Treaties.

Tamar Khuchua explained her thesis project “Harmonisation of the European Patent Judiciary – with or without the UPC” in which she explores the role of specialized IP courts in Europe. She substantially focuses on the fragmented patent system in Europe and considers that, regardless the final outcome of the unitary patent package Europe should increase the level of harmonization of the patent system both horizontally and vertically. Pieter Callens, her commentator, considered that such harmonization can be achieved by expanding the role of the CJEU, however, substantive patent law remains to a large extend an issue for national courts.

Lucius Klobučník tackled the challenge of “Ameliorating the impact of rights’ fragmentation on new online music services by legislative action”.  He argued that current fragmentation is the result of both market and legislative dynamics. Rather than try to “solve” the fragmentation problem he proposed to act against the effects of such fragmentation in the music industry. Dr. Holzmüller, congratulated him for the analysis and encouraged him to explore negative outcomes of fragmentation beyond those derived from increased transaction costs, such as the reduction of cultural diversity.

The online conference was overall an absolute success, thanks to the cooperation between EIPIN IS and the EUIPO and the hard work of people such as Prof. Anke Moerland and Livia Ionascu as well as all the EUIPO´s IT technical support team and we all hope that this is the beginning of an even closer cooperation.