ESR presentations at the EUIPO

The March edition, called “EUIPO talks: bridging research to the real world”, was organised by the EUIPO as one of the EIPIN-IS partner organisations, which currently hosts 4 of our ESRs. It was aimed at introducing the attendees to some of the preliminary results of the researches. The event was attended by more than 50 participants, including representatives of the Observatory, ICLAD, Boards of Appeals, the Academy, and the Pan-European Seal trainees. 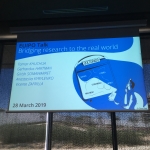 Gerben Hartman (ESR 13) started with a brief overview of the EIPIN-IS programme, explaining its objectives and functioning, including the concept of secondments to professional institutions, which deal with topics relevant to the researchers.

He was followed by Girish Somwarpet (ESR 2), who challenged the audience with his presentation: Girish addressed the question of whether one patent system should exist for all kind of inventions, ranging from pharmaceuticals to Internet of Things.

After this, Anastasiia Kyrylenko (ESR 10) presented the audience with the latest trends in IP norm setting through negotiations of trade agreements. She used her research concerning the EU free trade agreements with, respectively, Georgia, Moldova and Ukraine to illustrate potential issues during the negotiation and implementation of another country’s legal order.

This presentation was followed by Vicente Zafrilla’s (ESR 7) talk on standard essential patents. Using real-life examples, such as the 5G standard, soon to be included in all of our personal devices, Vicente explained, how deviations from disclosure obligations can impact innovation.

Tamar Khuchua (ESR 14) took over and introduced the audience into different academic approaches to the necessity of specialised jurisdictions, dealing with intellectual property rights cases. Building on most relevant studies in this field, including a recent study from the EUIPO, Tamar presented the attendees with possible advantages and disadvantages in creating such a court.

The EUIPO talk was wrapped up with a round of questions from the attendees, addressing both the presentations themselves and the researchers’ individual experiences, while doing a PhD.

About the Author: Yleen Simonis